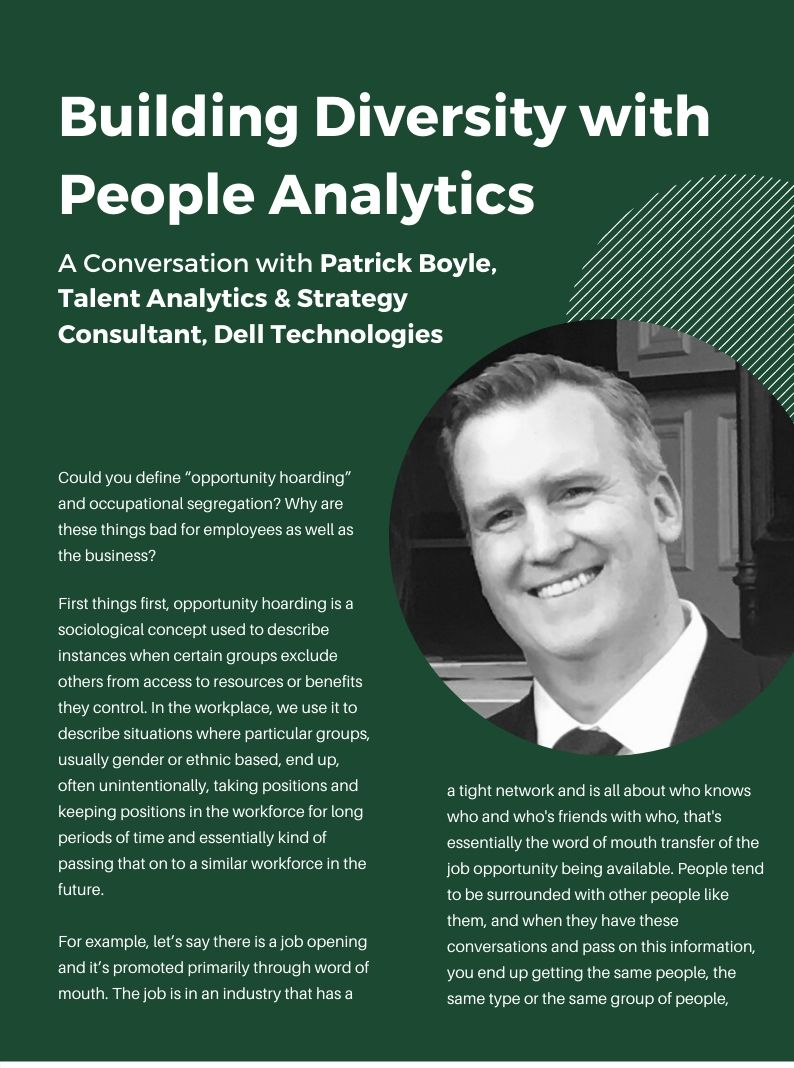 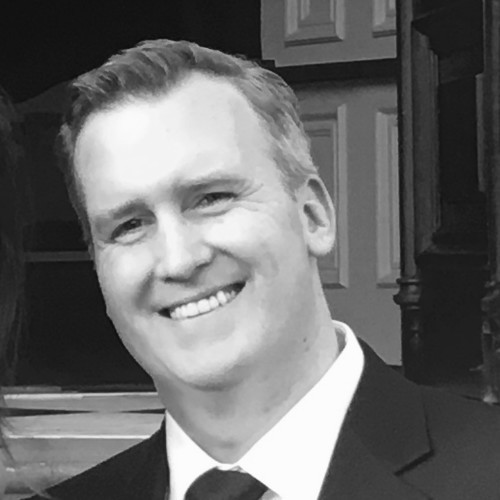 Could you define “opportunity hoarding” and occupational segregation? Why are these things bad for employees as well as the business?

First things first, opportunity hoarding is a sociological concept used to describe instances when certain groups exclude others from access to resources or benefits they control. In the workplace, we use it to describe situations where particular groups, usually gender or ethnic based, end up, often unintentionally, taking positions and keeping positions in the workforce for long periods of time and essentially kind of passing that on to a similar workforce in the future.

For example, let’s say there is a job opening and it’s promoted primarily through word of mouth. The job is in an industry that has a tight network and is all about who knows who and who's friends with who, that's essentially the word of mouth transfer of the job opportunity being available. People tend to be surrounded with other people like them, and when they have these conversations and pass on this information, you end up getting the same people, the same type or the same group of people, in the same positions. As a result, your workforce might not be as diverse as you would hope. However, if there was a more equitable way of disseminating this information, you'd have a much larger and diverse pool candidates.

Occupational segregation, on the other hand, is when particular groups, either gender or ethnic groups, are more or less channeled into a specific role or job function or job. I did a lot of work with the city of New York identifying when and where organizations end up having one particular group kind of dominate a particular field.

For example, and this is well documented, certain careers like school safety agents, tend to be dominated by women of color. While other positions, such as software developer roles, tend to have a very large white male concentration. that if you had less segregation in the occupations, that it would be beneficial for everyone.

As to why opportunity hoarding and organizational segregation is bad, to start, it minimizes your pool of talent. You end up excluding people that are very talented and capable just because either the opportunity isn't visible to them. In addition, organizations that lack diverse talent pools also tend to lack diversity of thought, which is also very valuable to organizations as it differing viewpoints foster innovation. I think of it kind of like a football team. If you're on a football team, you don’t want 11 quarterbacks. You want diversity. You want some players who are bigger, some who are faster, etc. You want the right mix of people and talent to win which is why having a large talent pool to pull from is so crucial.

How do you go about measuring occupational segregation? What are some of the key metrics and analytics you use?

The primary one used is something called the dissimilarity index, and it's a really fascinating metric. It was originally developed to measure, I believe, housing segregation. City would use it to determine where people were living and how certain groups were segregated into certain geographical areas by race.

Eventually, people started applying the dissimilarity index to job functions or job roles or job families at various levels. It's a very simple measurement that uses a scale from zero to 100 to denote the amount of diversity in any particular title or role.

To elaborate, let’s say there's a 60-person organization, you've got 40 men and 20 women. And one job is a painter and the other job is a carpenter. So if you look at the carpenters and you see that, say, 80% of the carpenters were women and 20% of them men, and then you would look at the painters and you see 20%, of the women were painters and 80% of the men were painters. Using the Index of Dissimilarity methodology, you would come out to a ratio or percentage of 60% dissimilarity index. However, the industry standard is a dissimilarity index of zero to 30 (which indicates very low segregation while 100 indicates total segregation) so you’d have a bit of work to do here when it comes to diversifying those two roles.

I think that it's important to recognize that it's easy to look at your organization as a whole and, based on that big picture view, assume you have this great, diverse workforce. However, when you go in and you drill down into the details, you may see that while you have excellent diversity numbers, the majority of those diverse numbers are coming from positions that are less desirable. They have lower salaries, they have higher attrition rates, for one reason or another. You've got great diversity, but is the diversity distributed equally throughout the organization? Because that's very important.

Otherwise, what's the point of having diversity if you're putting all of the diverse people in specific roles and you're not actually taking advantage of the benefits of having the diversity? I think it's great that people are starting to use people analytics a little bit more in the diversity space. However, measurements for occupational segregation such as the dissimilarity index are still underutilized.

Once you've identified occupational segregation as a key priority for your organization, how did you go about addressing this issue? In other words, how did you turn insight into action?

To identify which gender or ethnicity is dominating that field and why, you need to look at all the data you have: onboarding surveys, hiring data, anything you can. If you have an applicant tracking system, you go in and you get a data dump from there and pull out information the locations where recruiters went to hire for this position, or any sort of the hiring practices that went into this role. If it was interviews, if it was exams, if it was tests. If it was any sort of evaluation that people took, are they subjective? Are they not objective enough for hiring the the right people?

Then you want to determine the barriers preventing a more equitable distribution. And sometimes, it's unfortunate, but it's simply a function of location. If you have a higher population of a particular group of people in an area that can actually physically get to the job, then that's the group of people that are going to end up getting hired. You know? And there's really not a whole lot you can do. But if you do have a diverse population to pull from, then there's another barrier that's preventing other groups from having this role.

Also, the job description itself can serve as a major barrier, either due to the language or the hiring practices associated with it. A good example of this is if you’re hiring for a role and in the job description you're requesting for someone with, let’s say, a STEM background. You’re only interested in applicants with STEM experience/education. You have to do more than just post the job description; you're going to have to actively recruit new groups of people. You have to make sure that you’re going to different locations, such as historically black universities or colleges, to ensure the position is promoted beyond the typical channels. Also, for example, they've done studies on how women react to job description differently than men. They tend to be turned off by the extreme superlatives, excessive requirements and “bro-speak” (i.e. “work hard, play hard”) that are commonly utilized in job descriptions for all kinds of jobs. So you may have to rewrite your job descriptions if they are only attracting one type of applicant.

What are some of the other ways people analytics can be leveraged to improve workplace diversity?

In terms of simply using people analytics to support our D&I programs, one thing we keep a close eye on is how successful we are at creating a diverse workforce via our hiring initiatives especially when it comes to filling entry-level positions. When we make an effort to hire people who are new to the workforce, are we getting a better, more diverse split when these people are first coming in? One of the great things about the new workforce is that we have a little bit more diversity to pull from. We also look at termination and attrition rates. It's important to keep your finger on the pulse of your terms and understanding, “are there significant differences between different groups in attrition? And if we do, what groups are they? Where are they from? What organization are they from? What role are they from?” And being able to present this information to leaderships teams and hiring managers so that they're aware if there’s anything within their organization that could be improved upon, that they need to keep in mind when crafting job descriptions, interviewing candidates, etc.

Over the past year or two, Dell has received a significant amount of positive press regarding its approach to diversity. Speaking from strictly  a people analytics perspective, how is it different from what other companies are doing?

I'm not part of the broader D&I team so I can't speak for them, but I can say that Dell is extremely data driven and the D&I team does a great job of communicating with our leadership teams to ensure that everyone has access to the data required to make these decisions This involves presenting scorecards to the leaders on a regular basis so they know where they stand and what their workforce looks like at all times. There shouldn't be any leaders out there that are not aware of what their organization looks like in terms of diversity.

Please note: That all fields marked with an asterisk (*) are required.