Equal Opportunity Or Affirmative Action? A Computer Program Shows Which Is Better For Increasing Diversity 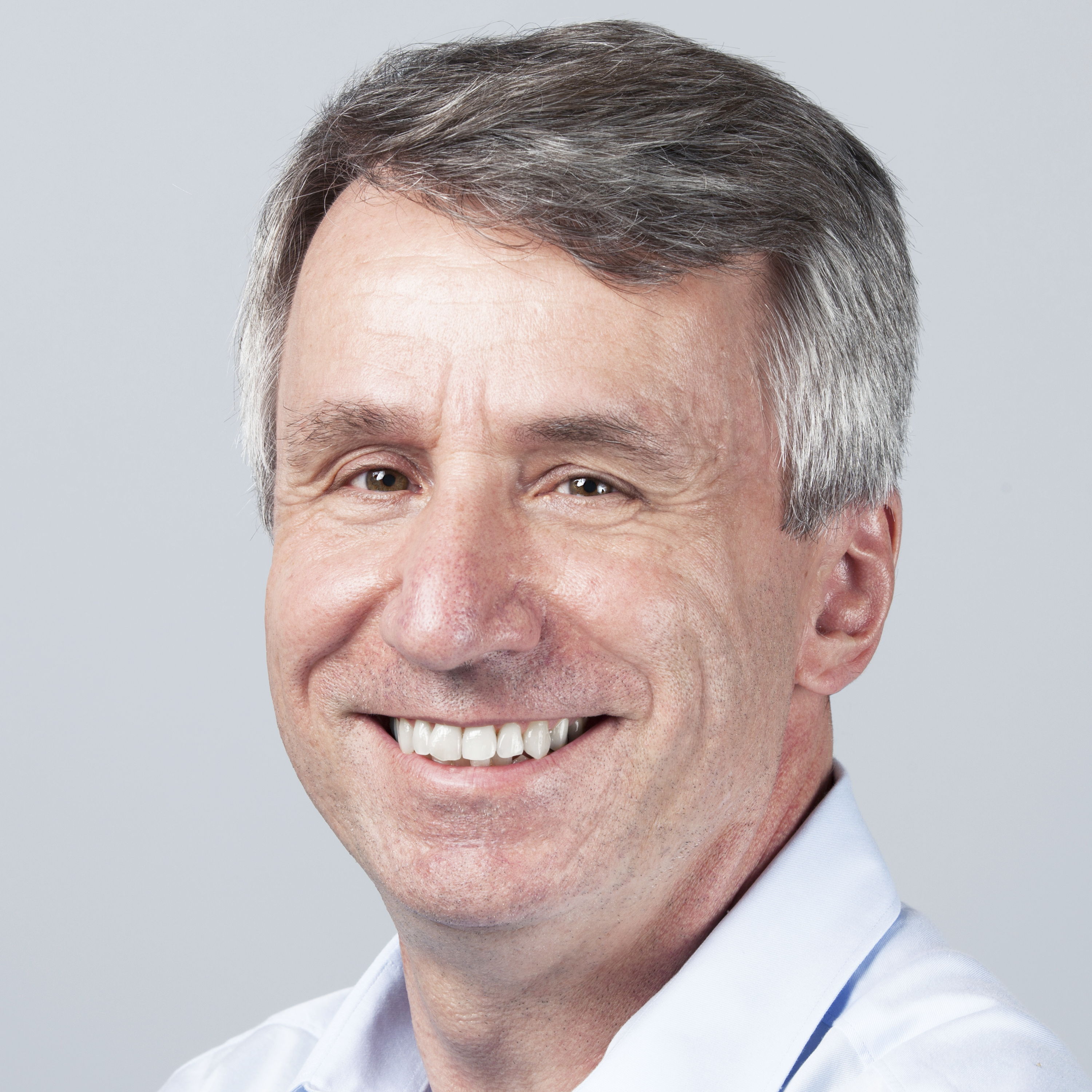 In a recent post, we suggested that simply removing biases may not be sufficient to restore gender balance in an organization that is imbalanced. We described a simple hypothetical scenario involving a fictitious company, ACME, whose management ranks included 30% women and 70% men. For simplicity, we focused on gender, but the same argument would apply if we were looking, for example, at underrepresented minorities.

In our post we suggested that simply giving each employee equal opportunity of being hired or promoted is insufficient to restore balance, because imbalances tend to self-perpetuate. In the ACME scenario, if each manager has an equal chance at promotion, 70% of the promotions will go to men because there are more men. If instead the goal is to shift the company to a balanced situation, women must be promoted more aggressively. In other words, Equal Opportunity is not enough, what is needed is something akin to Affirmative Action.

Given our technical background, we decided to put our computer where our mouth is, so to speak. To this end, we adapted our gender-balance simulation platform to the ACME scenario, to see if we could support our claims.

A simple but realistic computer simulation

The computer simulation, built using the NetLogo software developed at Northwestern University, replicates the hiring and promotion processes of a company made up of four levels of employees: Entry Level, Mid Level, Management and Executive. The simulation captures, on a weekly basis, the on-going personnel-related activities that happen at ACME: hiring, promoting and terminating.

In preliminary tests we ensured that the simulation behaves “reasonably.” For instance, starting with a 50/50 initial balance and no biases, on average ACME retained a 50/50 balance over the five-year simulation. We also checked that hiring and termination rates fell within reasonable ranges.

We wanted to use this computer simulation to ask the following questions:

In other words, we wanted to see whether an Equal Opportunity-type rule is sufficient to undo the imbalance that was created by five years of biased promotions.

In a nutshell, we found that, even when the promotion gender bias is small, the resulting imbalance cannot be eradicated simply by removing the biases.

More specifically, we found that:

Summary and explanation of the results

The figure below illustrates results across six sets of runs, organized in two rows and three columns. Each chart shows four pairs of bars, with each bar showing the proportion of men (green) and women (red) at each level. Within each chart, seniority goes from Entry Level at the left to Executive at the right. 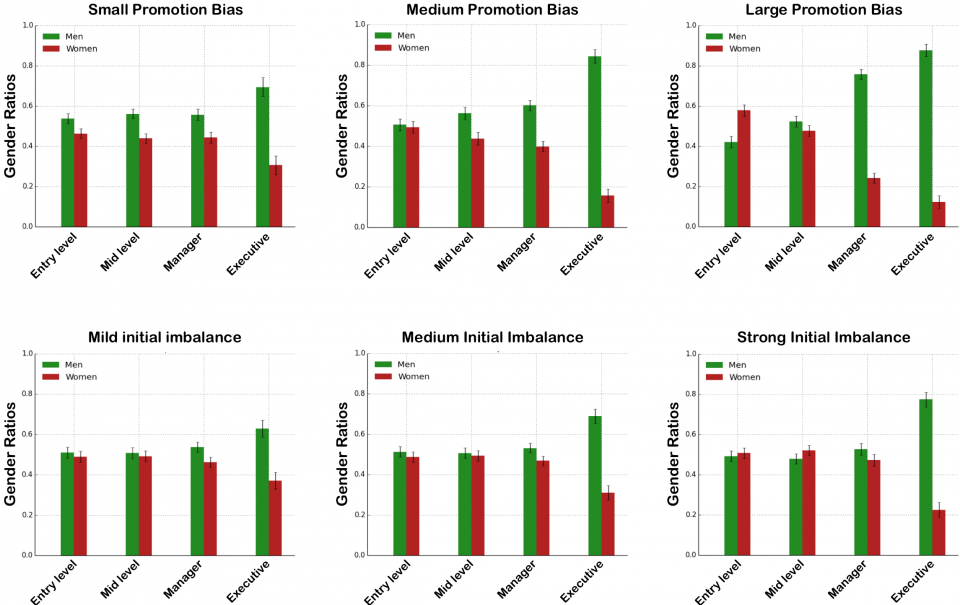 For the charts in the top row, the simulations were started with a 50/50 gender ratio at every level. The results shown in the top row represent the gender ratios reached after five years of the specified level of promotion bias (left: small; center: medium; right: large). For the charts in the bottom row, the initial imbalance is set to match the imbalance generated from the corresponding bias (in other words, the chart directly above it). The results shown in the bottom row represent the gender ratios obtained after five years of operating with no biases at any level.

In spite of its simplicity, our simulation shows some trends that align well with what we see in the real world.

First, introducing biases of any level leads to a “pyramid-like” distribution, with the lower levels being relatively balanced, and the higher levels showing increasing imbalance. This kind of pattern is well documented, and the levels of imbalance we see are very similar to imbalances seen in various industries.

Second, as we have speculated, promotion biases lead to imbalances rapidly, but simply removing biases does not lead to a rapid return to balance, especially for the more senior employee levels. This is evident at all levels of bias: in all three cases, simply turning off biases seems to restore balance at the lower levels, but much less so at the executive level.

Third, an interesting phenomenon can be seen in the upper right chart: in the presence of a strong bias to promote men, the resulting company distribution tends to have disproportionate numbers of men at the top levels, but an actual majority of women at the entry level. This, in retrospect, makes sense: since ACME is hiring an equal number of men and women, and more men are advancing through the ranks, the net result is that more women get stuck at the lower levels. This kind of “bottom-heavy” distribution, sadly, is found in a number of industries: a recent study by McKinsey and Leanin.org shows that Healthcare, Hospitality and Financial Services all exhibit this sort of pattern.

Conclusions: Equal Opportunity is not enough

We have repeatedly argued that managing human capital is a complex problem, and that patterns at the organizational level develop in sometimes unexpected ways that depend on the behaviors and interactions of individual employees. We have also suggested that computer simulations can be powerful tools in helping us understand the emergent behavior of organizations. We hope that our results, however simple, illustrate why Diversity & Inclusion initiatives should be supported by a quantitative analysis that takes into account the complex interactions that exist within any organization.

In the specific context of biases, we have seen many examples of companies that promise to improve their level of diversity simply by removing biases, e.g., through unconscious bias training or by ensuring gender- and race-blind processes for hiring and promotions. However, even this simple simulation suggests that as long as imbalances exist, removing biases is not enough.

The simulation we have described here can be extended to include many other factors, such as who is responsible for promotions, hiring of employees directly at higher levels, different kinds of biases, employee satisfaction and engagement, and so on. Our suspicion is that none of these factors would eliminate the main finding, i.e., that simply removing biases is not a sufficient strategy to restore balance. In fact, we suspect that these additional factors would reveal that imbalances are even more difficult to eradicate than our initial results suggest.

We wish to thank Xiaofan Liang for her help with the simulation software and for running all the experiments described and generating the results charts.

This article was originally posted on Forbes.com on August 22, 2016.