Getting the people with the right mix of skills on a team generates a 1+1=3 multiplier effect that must be present for high performance outcomes, says Dennis Narlock, Continuous Improvement Officer with the US Navy. In this article Dennis looks at how to create high performing teams quickly by using the Networked Talent Model.

Throughout the installation and enculturation of any process improvement methodology individuals from diverse backgrounds have to join up and function together as a team, with purposes as diverse as reducing cycle time to increasing product quality.

The formation of a team usually follows one of three tracks; people volunteer to join the team, people are assigned to the team, or the team is comprised of a mix of volunteers and directed team members.

In all cases, the team will follow a normal path of development progressing through four stages: Forming, Storming, Norming and Performing. And as anyone who has ever created and lead teams can tell you, the path to performance can be fraught with challenges, particularly if several key aspects aren’t addressed early on.

How rapidly a team progresses through each stage to reach "Performing" is a product of several factors: organizational structure, interdependency between the team members, their willingness to contribute to the team, their sense of value as a team contributor, the team leader’s skills at guiding them, and the compelling nature of the task that has bonded them together.

Organizations with a functional structure based on a division of labor create fertile ground for conflict. Individual business units will work to improve their processes, at times taking actions that may be detrimental to the organizational level process. This ignores the interdependency between business units and will result in sub-optimization of the process, creating a win-lose situation for the organization. Instead, all of the stakeholders should strive to achieve effectiveness and efficiency at the system level.

The process of establishing a systems level focus for an organization is rooted in strategic planning by the executive leadership team. Executive Leadership’s identification of a clear "burning platform" for the organization will establish a systems level goal focused on the product quality, customer value, and financial impact.

Identifying, clarifying, communicating and driving towards organizational level objectives create a foundation for moving forward with a process improvement initiatives and begin to break down micro-business silos.

Failure to work across business silos is a dead end street

The global business environment is characterized by a rapid exchange of information and cost effective operations thus creating a requirement that businesses are agile enough to adjust to the rapidly changing marketplace. When a team is established to evaluate and improve a process with the aim of impacting the system, the competition between the individual business units transfers the win-lose situation to the team where it is expressed as conflict between team members. As a result this will often leave a team mired in the Storming stage of team development, an unacceptable outcome in the 21st century marketplace.

A team mired in the Storming stage can have significant impact on the organizations bottom line. Teams must be able to execute projects quickly and efficiently.

Use the Networked Talent Model to Accelerate Team Development

The Networked Talent Model (NTM), pictured in the diagram below, recognizes that all individuals in an organization have four skill sets. 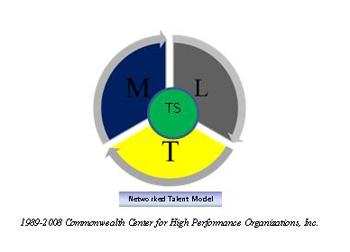 Depending on the position that an individual holds within an organization, they will utilize the different skills to varying degrees. For example, a technician performing corrective maintenance on an item that requires a high degree of mechanical work is making use of their Technical skill set.

When that same technician is teaching the craft to another person they are utilizing their Technical and Team Skills. If they are leading a project to overhaul that same piece of equipment with a team of technicians they will make use of Management, Technical and Team Skills. Finally if they are coordinating multiple teams performing these actions within an organization, all four skill sets will be used. Each example above does not mean that a skill set not listed is not used, just that it is not a primary skill set for completing the task at hand.

All of the skill sets identified within the Networked Talent Model hinge on the team skill set. An individual’s ability to successfully interact with other members of a team in a symbiotic beneficial manner is the critical ingredient in creating an environment where world class performance can be achieved.

Getting the membership "right" generates the 1+1=3 multiplier effect that must be present for high performance outcomes. In building an organization dedicated to continuous improvement, with the objective of achieving world class performance, it is crucial to establish improvement teams that are networked, talent based, and work to maximize the inclusion of the required technical and change management skills. These teams will achieve actionable success operating in a parallel organization free of the normal business unit competition, as depicted in the diagram below. 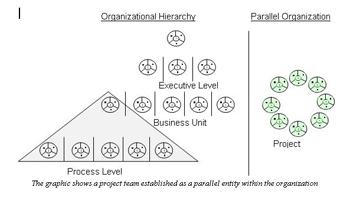 The graphic shows a project team established as a parallel entity within the organization composed of people from a mix of levels and roles within the business. Copyright 1989-2011 Commonwealth Center for High-Performance Organizations, Inc. Reproduced here with permission.

Traditionally teams are comprised of a Black or Green belt who leads the improvement effort, several members from the immediate process being considered, and one or two people outside of the process. In addition, the team will be given access to key personnel who provide specialized guidance, usually related to the financial or IT portion of the organization. This approach overloads a team with technical skills that are inherent to the business unit process at the exclusion of the system level process; while establishing the Belt as the expert with the knowledge to improve the process.

Utilizing the Networked Talent Model and a systems level focus, identify the technical skills required on the team, select team members based on their technical, team, and change management skill sets, and establish the team as a parallel organization to the individual business units. The goal behind establishing the team in such a manner is to create a win-win situation for each of the team members focused on a system level goal.

Once the project team has been established, there are some guidelines that need to be followed. These guidelines support the system level focus and foster an environment where Adult-Adult conversations are the expected norm.

The Seven Guidelines for operating inside a Parallel Organization

2. Focus on the best decision for the whole

6. No retribution for following the guidelines

Traditionally the forming stage of team development is characterized by a focus on procedures with limited interaction among the team members. Discussions are dominated by the team leader or facilitator, who in many cases is the Black or Green belt leading the project. This stage is followed by a period of conflict as team members question the team’s objectives, organization or procedure. These actions are part of the storming stage of development as team members seek to identify or claim their role within the team.

The selection of team members using the Networked Talent Model and the guidelines that accompany operating in the parallel organization provide the foundation for the forming stage of team development. Team members gain a more rapid understanding of the system level objectives and procedures that will be followed. They learn what technical skills each team member brings to the team. This portion of forming is crucial to powering through the storming stage.

Team members must clearly understand that the team will succeed or fail as a single entity and that because each team member’s technical skill set has a unique aspect, they will be reliant on one another to achieve success. The process of clarifying roles and objectives will create the environment needed for a team to rapidly move from forming to norming.

As the team enters the norming stage they are more comfortable working with one another and have assumed responsibility, as a group, for achieving the objectives. Again, the Networked Talent Model will assist them in moving through this stage more easily. This rapid transition towards performing is based in the technical skill set that each team member brings to the team. Knowing who to go to for assistance with a particular task is important. However, what is more important is allowing the person with that skill set to assume the leadership role during that portion of the team’s execution.

The team that is formed using the Networked Talent Model and operating in a Parallel Organization, according to the guidelines, will reach the performing stage more rapidly than a traditional team. The team members will demonstrate pride around the team and its performance. They will reveal in learning from each other and they will produce actionable results for the organization.